One of our flamingos didn't stick to the Stay Safe, Stay Home message and decided to take her daily exercise via Castle Hill! Our keepers were on the scene within minutes and safely returned the flamingo back to their enclosure where she is now once again self-isolating! pic.twitter.com/ZV3vWVqgjQ— Dudley Zoo (@dudleyzoo) April 15, 2020

April 16 (UPI) -- Officials at a British zoo said a flamingo escaped from its enclosure thanks to a well-timed gust of wind, but was soon returned to its flock.

The Dudley Zoo confirmed the flamingo was carried out of its enclosure by a gust of wind Tuesday afternoon.

The flamingo was caught on video by surprised bystanders who spotted the bird wandering near the zoo.

A zoo spokeswoman said the flamingo headed back to zoo grounds on its own accord after only a few minutes and was recaptured on the facility's lawn.

"Thanks to a phone call from the public, keepers quickly located the bird and following a quick health check she was returned unharmed to the rest of the flock," the spokeswoman told the Express & Star newspaper.

"Although the flamingos wings are clipped so they cannot fly they are still able to glide. The management team will investigate the best option to fully net over the flamingos existing outdoor area," she said.

Officials said the flamingo was examined by a veterinarian and found to be suffering no ill-effects from its time on the loose.

Odd News // 15 hours ago
Mom's video captures 6-year-old fleeing from shark at Hawaii beach
May 5 (UPI) -- A mother recording her 6-year-old daughter playing in the waves at a Hawaii beach captured the moment the girl was chased out of the water by a shark. 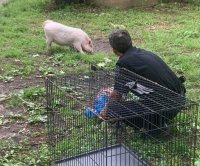 Odd News // 17 hours ago
Arkansas police capture loose pig, avoid being 'hambushed'
May 5 (UPI) -- Police in Arkansas responded to a call about a loose pig and recounted the capture the effort in a pun-filled social media post.

Odd News // 18 hours ago
Animal rescuers in Iowa find reported loose gator was plush toy
May 5 (UPI) -- Animal services officers in Iowa were called to an apartment complex on a report of an alligator on the loose, but they arrived to find the reported reptile was a life-sized plush toy.