Russians take a ride on ice chunk floating down river

April 10 (UPI) -- A surprised witness in Russia captured video of an unusual spectacle -- three people floating down a river on a chunk of ice.

The video, filmed Wednesday in Novokuznetsk, shows the three people standing on one of several pieces of ice floating down the river.

The three people appear calm and do not seem to consider themselves to be in danger.

The people wave to the filmer as he shouts his surprise at the sight. 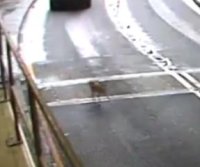