April 3 (UPI) -- A woman who flew from Washington, D.C., to Boston amid the COVID-19 pandemic captured video on board the plane when she discovered she was the flight's sole passenger.

Sheryl Pardo said she flew last week to visit her ailing mother, who has since died, and she found out on the American Eagle flight, which could have handled nearly 100 passengers.

Pardo recorded video as a flight attendant gave a "shout out to Sheryl" during the introductory announcements.

Pardo said she was upgraded to first class and the two flight attendants provided excellent service during the flight.

Odd News // 17 hours ago
Man wins lottery jackpot thanks to rain canceling son's practice
Nov. 24 (UPI) -- A British Columbia man who collected a lottery jackpot of more than $500,000 said he has some unexpected rain and his son's appetite to thank for his good luck.

Odd News // 19 hours ago
12-year-old boy accepted to Georgia Tech, seeks NASA career
Nov. 24 (UPI) -- A 12-year-old Georgia boy who has been accepted to attend Georgia Tech said he plans to study aerospace engineering for a career in space exploration. 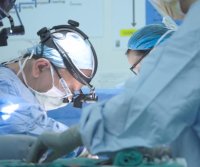 Odd News // 21 hours ago
Mysterious monolith found in southwest Utah
Nov. 24 (UPI) -- Authorities in Utah said they are investigating the origins of mysterious monolith spotted sticking out of the ground in a rural area in the southwestern part of the state.

Odd News // 21 hours ago
Sandhill crane named 'Fraser' released after treatment for golf ball injury
Nov. 24 (UPI) -- A sandhill crane dubbed "Fraser Crane" by rescuers was released back into the wild in British Columbia after receiving treatment and rehabilitation for an injury from an errant golf ball.

Odd News // 22 hours ago
Expedition to Earth's lowest point earns Guinness records for three
Nov. 24 (UPI) -- A recent expedition to the Challenger Deep, the deepest-known point on Earth, resulted in Guinness World Records for all three members of the expedition.