A Maryland woman said following her lottery routine led to her second jackpot in two years. Photo by Robert Lessmann/Shutterstock

Feb. 27 (UPI) -- A Maryland retiree said that following her usual lottery routine paid off when she scored her second big win in two years.

The woman said she almost threw her ticket out later that same day before remembering she hadn't checked it. She scanned the ticket using the Maryland Lottery smartphone app and discovered she had won a $20,100 prize.

The win was the woman's second large Racetrax jackpot in two years. She credited her luck to following her lottery routine.

The woman said her latest winnings will go directly into her savings account.

Odd News // 10 hours ago
Colorado Lottery winner collects another jackpot in Nebraska
April 2 (UPI) -- A man won a $280,000 jackpot from the Nebraska Lottery years after collecting $25,000 from a Colorado Lottery scratch-off ticket. 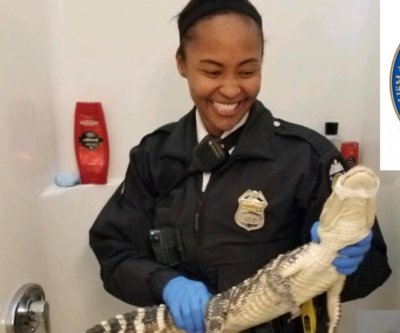 Odd News // 12 hours ago
Ohio police find alligator in resident's closet
April 2 (UPI) -- Police in Ohio said they were investigating a reported robbery at a home when they made an unexpected discovery -- an alligator in a closet.

Odd News // 12 hours ago
Police chase moose through Idaho city
April 2 (UPI) -- Residents of an Idaho neighborhood watched an unusual police chase unfolding outside their homes when a moose went for a run through town.

Odd News // 15 hours ago
Wild leopard rescued from 50-foot well in India
April 2 (UPI) -- A leopard that fell into a 50-foot-deep well in India was rescued by Forest Department personnel in an hours-long operation.

Odd News // 16 hours ago
Man seeks permission to fly kite at 20,000 feet
April 2 (UPI) -- A Canadian man is seeking federal approval for his Guinness World Records goal: flying a kite to a height of 20,000 feet.