Feb. 26 (UPI) -- Authorities in Washington state came to the rescue of a sea lion found wandering down a rural road about two miles from the nearest large body of water.

Scott Schroeder, a wildlife officer with Washington's Department of Fish and Wildlife, responded to the scene and confirmed the animal was a 600 to 700 pound female Steller sea lion.

The sea lion was about 2 miles away from the nearest large body of water, officials said.

Schroeder said deputies and wildlife officers kept tabs on the sea lion overnight and crews were able to corral the animal into a cage on a trailer Sunday.

The sea lion, which Schroeder said appeared to be in good health, was released into the Columbia River.

Odd News // 20 minutes ago
Czech diver breaks Guinness record for swimming under ice
Feb. 24 (UPI) -- A Czech freediver broke a Guinness World Record when he swam for a distance of 265 feet under the ice of a frozen lake. 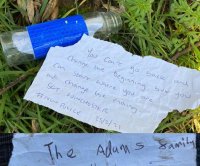 Odd News // 20 hours ago
Tennessee woman rescues dog from under ice of frozen pool
Feb. 23 (UPI) -- A Tennessee woman's home security camera was recording when she climbed into the frigid water of her backyard pool to rescue her dog after the pet fell through the ice.

Odd News // 1 day ago
Idaho woman dresses husband in 35 T-shirts for Guinness record
Feb. 22 (UPI) -- An Idaho couple teamed up to tackle an unusual Guinness World Record when the wife helped the husband don 35 T-shirts in one minute.