Feb. 18 (UPI) -- A Swedish bakery said it believes it has set a new Guinness World Record by baking up a semla bun, a traditional Shrove Tuesday treat, weighing in at 661 pounds.

The Bake My Day bakery said it unsuccessfully attempted to cook a giant semla bun five times before its final attempt resulted in the 661-pound pastry Monday in Stockholm.

The semla bun contains 286 pounds of cream and 66 pounds of almond cream, the bakery said.

The bakery had several companies assist with measuring the semla bun and creating 3D models to submit to Guinness World Records for official recognition.

The giant bun went on display Tuesday at Stockholm's Sergels Torg. The bakery said it will be cut up into more suitable portions and distributed to hungry onlookers.

Odd News // 13 hours ago
Steer on the loose after high school escape in Australia
Oct. 29 (UPI) -- A high school in Australia is asking the public to be on the lookout for a steer that broke though a "stock-proof" fence and escaped from the campus.

Odd News // 13 hours ago
Diamond lost in library drop box retrieved after weeklong quarantine
Oct. 29 (UPI) -- Employees at an Ohio library reunited a patron with the diamond that fell off her wedding ring after the gem was found in a bin of quarantined returns.

Odd News // 15 hours ago
Woman does 34 pull-ups in one minute for world record
Oct. 29 (UPI) -- A 45-year-old West Virginia fitness instructor who started doing 100 pull-ups a day during a COVID-19 lockdown broke a Guinness World Record by completing 34 in one minute. 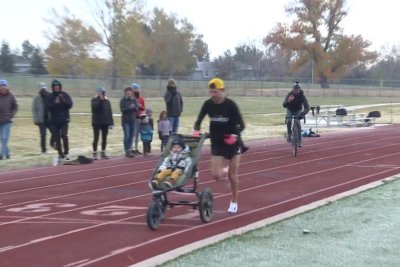