Jan. 23 (UPI) -- A Michigan man leaving the drive-through ATM at a credit union investigated a plastic box in the middle of a road and discovered it contained $27,000.

George Condash said he was leaving the Westland Federal Credit Union in Westland when he spotted the plastic box in the roadway.

"Well, first, I just thought it was trash. For some reason it hit me that, 'Why don't I just pick this up so no one else has to swerve around it?'" Condish told WDIV-TV.

Condish discovered the box was an ATM cassette full of cash. Security video from the credit union shows Condish picking up the box and carrying it inside.

The box, which actually only contained $27,000, had mistakenly been left in the roadway by an armored truck security guard.

"It's not mine and any honest person, I would hope, would take it back in," Condash said.

Condash said the credit union did give him a reward for his honesty.

Odd News // 24 minutes ago
Baboons escape near Sydney hospital, wander the city
Feb. 25 (UPI) -- A trio of baboons being taken to a Sydney, Australia, hospital escaped from their transport truck and wandered through the area.

Odd News // 19 hours ago
Woman finds snake slithering under vacuum in her cupboard
Feb. 24 (UPI) -- A London woman looking for a pair of shoes in a cupboard inside her apartment found something far more startling -- a snake.

Odd News // 21 hours ago
Bayou explorer ends up trapped in Houston sewer
Feb. 24 (UPI) -- Firefighters in Houston shared photos from the rescue of a man who went exploring in the bayou and ended up trapped in the city's sewer. 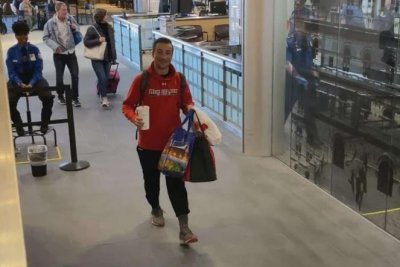