By
Ben Hooper
Watch live video from jennyhoops on www.twitch.tv

Nov. 21 (UPI) -- A Chicago woman is more than halfway to her goal of breaking a Guinness World Record by hula-hooping for 100 hours.

Jenny Doan of Wicker Park is livestreaming her world record attempt at District Brew Yards as she attempts to keep the hula hoop moving around her body for 100 hours, with 5 minute breaks allowed for rest and bathroom breaks.

Doan said the overnights are the most difficult part of the challenge, having to keep focused with only sporadic company.

"It's been a roller coaster," Doan told WTTW. "It's been good. It's been tiring."

Doan needs to surpass 74 hours, 54 minutes to break the current record, but she is aiming for 100 hours. The record attempt is raising funds for Mental Health America. 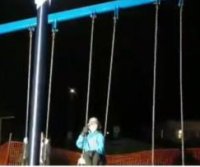 Odd News // 12 hours ago
Company offers to pay someone $1,000 to play cornhole
March 8 (UPI) -- A lawn care company is seeking an outdoor gaming enthusiast to make $1,000 by playing cornhole, a game involving tossing small bags of corn into holes in a board.