Nov. 18 (UPI) -- A pair of raccoons made a scene at a CVS store in New York state when they fell through the ceiling and went for a stroll through the store.

An employee at the CVS in Warwick said he was in the candy aisle when he hard a loud noise that sounded like a piece of the ceiling had fallen.

The worker said he investigated the noise and found two raccoons had fallen into the store through the ceiling.

A video shows the two animals wandering the aisles after their unceremonious entrance.

A different pair of mischievous trash pandas made headlines recently when they were caught on camera taking shelter from the rain inside the Arkansas State University library. A school official said the raccoons were captured safely and relocated outside.

Odd News // 16 hours ago
Police seek owner of lost snake found at gas station
April 9 (UPI) -- Police in Missouri are trying to find the owner of an unusual piece of lost property found at a gas station -- a pet snake.

Odd News // 17 hours ago
Toilet paper roll cakes save Finland bakery from closing
April 9 (UPI) -- A bakery in Finland said it was spared going out of business thanks to a unique creation that went viral on social media: cakes shaped like toilet paper rolls.

Odd News // 17 hours ago
Elephant rescued from 10-foot-deep well in India
April 9 (UPI) -- Wildlife rescuers in India said it took about three hours to safely remove an elephant that fell into a disused farm well.

Odd News // 20 hours ago
Georgia bar pays unemployed staff with dollar bills stapled to walls
April 9 (UPI) -- A Georgia bar owner said a tradition of customers stapling dollar bills to the business' walls is allowing her to distribute $3,714 to her now out-of-work staff.

Odd News // 22 hours ago
Goat rescued from New York state highway overpass
April 9 (UPI) -- Police and firefighters responded to an overpass in New York state to rescue a goat that fled onto the beams suspended under the bridge. 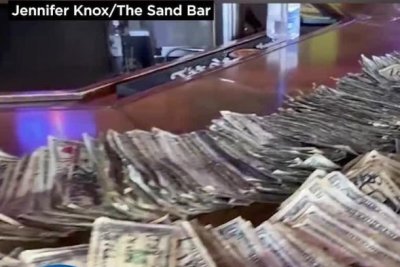