Exotic snake rescued from under hood of taxi cab in Wales 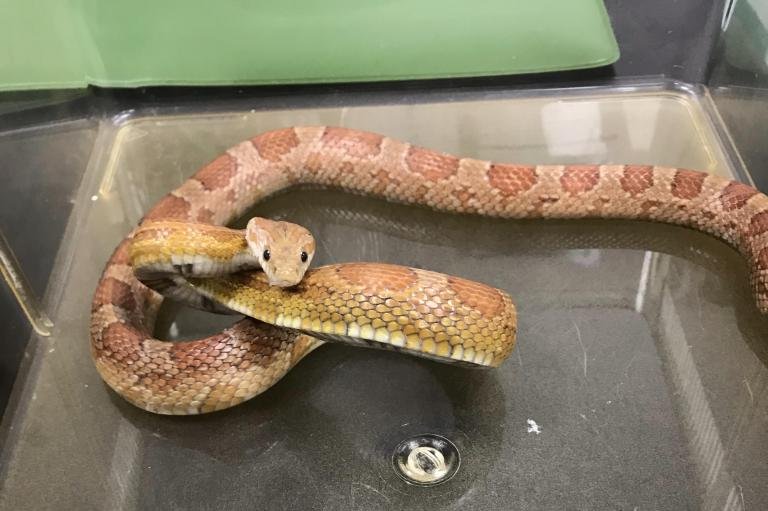 A corn snake was found curled up for warmth under the hood of a Walsh taxi driver's vehicle. Photo courtesy of the RSPCA

Oct. 17 (UPI) -- A Welsh taxi driver summoned help from animal rescuers when he made an unexpected discovery under the hood of his cab -- an exotic snake.

RSPCA Cymru said Inspector Christine McNeil responded Friday to the Grandetown area of Cardiff, where a taxi driver popped the hood of his vehicle and found a corn snake huddled up for warmth.

"This was certainly one of the more unusual calls I've dealt with recently, with a bright orange corn snake found under the bonnet of a taxi," McNeil said.

She was able to remove the snake and take it to a veterinarian, who determined the serpent was underweight and cold, but in otherwise good health.

The corn snake, a species native to North America, is believed to be an escaped pet and it is being cared for at a specialist facility while officials attempt to identify its owner.

Odd News // 21 hours ago
Deer rescued with head stuck in bird feeder
Jan. 15 (UPI) -- A mule deer in Pine, Colo., was rescued by park rangers after getting its head jammed into a 10-pound plastic bird feeder.

Odd News // 21 hours ago
Dog missing in stolen car returned after two weeks
Jan. 15 (UPI) -- A dog stolen in Denver on New Year's Day inside an unlocked car was returned to its owner after being missing for two weeks.