A Maryland woman's Keno ticket with numbers that all included a "9" digit ended up winning her $30,000. Photo courtesy of the Maryland Lottery

Oct. 3 (UPI) -- A Maryland woman's affection for the number nine paid off in a big way when she scored a $30,030 Keno prize from the Maryland Lottery.

Pamela Wendland, 63, of Edgewater, told Maryland Lottery officials she was with her daughter at The Jetty Restaurant and Dock Bar in Wendland when she decided to play a few rounds of Keno.

"I play Keno three or four times a week and I always play the 9s," Wendland said. She said her first multiple-draw ticket was a bust. "There were 9s there, just not enough."

Wendland said she watched the next few draws and a pattern emerged.

"There were no 9s for several games in a row," she said. "I figured 9s were due so I bought one more 8-spot ticket."

Wendland, who won $30 from another draw, said she plans to share her winnings with family members and pay for an extravagant 20th wedding anniversary celebration.

Odd News // 3 hours ago
Lost class ring returned to woman 36 years later
Feb. 20 (UPI) -- A woman who lost her class ring in a New York restaurant bathroom in 1984 was reunited with the item thanks to an air conditioner repairman's years-long search. 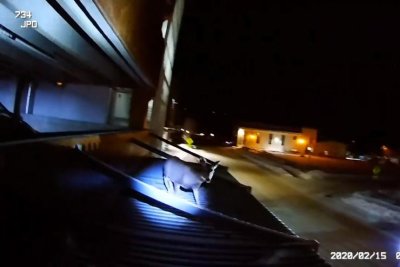