Escaped python in West Virginia is second in four months

A python was reported on the loose in West Virginia, just four months after a larger python escaped elsewhere in the state. File Photo by Susan Jewell/USFWS

Oct. 1 (UPI) -- Authorities in West Virginia said a 10 to 11 foot python is on the loose in a city after escaping from its owner's home -- marking the second python escape in the state in four months.

A Richwood City Hall spokeswoman said the pet snake escaped Sunday night on the south side of Richwood and the local police department is investigating the escape and searching for the snake.

The announcement came four months after a 15-foot, 4-inch python escaped from a truck in Morgantown, W.Va.

The Morgantown snake remains on the loose and experts said it is likely to be thriving in the wild.

The owner of the earlier escaped python was charged with allowing an animal to run at large.

Odd News // 7 hours ago
Lost lamb spends the night in Irish jail cell
April 19 (UPI) -- Police in Ireland said a lost lamb found wandering loose in a roadway spent the night in a jail cell before being reunited with its owners. 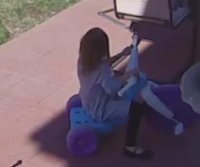 Odd News // 9 hours ago
Florida firefighters rescue ducklings from storm drain
April 19 (UPI) -- Firefighters in Florida came to the rescue of a family of ducklings who fell into a storm drain near a bridge.

Odd News // 9 hours ago
Idaho man catches balls with bucket on his head to reclaim Guinness title
April 19 (UPI) -- A pair of Idaho men reclaimed a Guinness World Record when one of them caught 107 tennis balls in an oversized bucket placed on his head in one minute.

Odd News // 10 hours ago
Monitor lizard rescued from busy Singapore road
April 19 (UPI) -- A pair of police officers in Singapore were caught on camera rescuing a giant monitor lizard that wandered out into a busy road.