We are investigating the possible theft of one of @SFTeachingZoo animals - a Solomon Islands Skink. The lizard is approximately 18-20 inches long and is a light brown/green color. The animal is valued at $1000. If you have ANY information please contact 352.395.5519. pic.twitter.com/PcCyZyBmMy— Santa Fe College Police (@SFCollegePD) August 27, 2019

Aug. 28 (UPI) -- Police said they are investigating whether a skink lizard missing from a Florida teaching zoo was stolen or escaped on its own.

The Santa Fe College Police Department in Gainesville said zookeepers at the Santa Fe College Teaching Zoo discovered the 25-year-old female Solomon Islands skink, which has lived at the facility for 20 years, was missing Sunday morning.

Police said zookeepers reported the missing lizard to authorities due to fears that it may have been stolen.

Jade Salamone, the zoo's conservation education curator, said the skink may have escaped on its own, but officials consider that unlikely. She said the lizard may have been stolen for sale as an exotic pet. 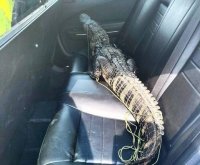