A team of scientists announced they have created a safe-to-drink vodka from water and grains taken from inside the Chernobyl exclusion zone in Ukraine. Photo courtesy of the University of Portsmouth

Aug. 9 (UPI) -- A group of scientists announced they have created vodka from ingredients found inside the Chernobyl exclusion zone and verified that it is safe to drink.

Atomik vodka was created by University of Portsmouth scientists from grain and water from inside the exclusion zone as part of a three-year research project into the radioactivity of crops grown inside the 19-mile radius around the Chernobyl nuclear plant, which experienced a reactor explosion in 1986.

"Thirty years on after the accident we found was that in the area the crops were slightly above the very cautious Ukranian limit for consumption. So technically, you can't eat those crops. But we thought, 'Well, we've got some grain, why don't we try making a vodka,'" project leader Jim Smith told CNN.

Smith's team found distilling the vodka reduced the radioactive contamination to an undetectable level, making it safe to drink.

"When you distill something, lots of impurities stay in the waste product, and the final product is more pure. And that's what we found with our vodka -- we fermented the grain then distilled it. We found that we couldn't measure any radioactivity in the product, except natural carbon 14 that you find in any spirit drinks, or any food," Smith said.

He said the newly founded Chernobyl Spirit Company will soon be selling Atomik vodka, with 75 percent of profits going to communities affected by the disaster. The vodka will be the first consumer product from the exclusion zone since the disaster.

Odd News // 12 hours ago
Alligator found hiding under vending machine at Florida gas station
June 17 (UPI) -- Three sheriff's deputies in Florida responded to a convenience store to help sort out an unusual problem -- an alligator hiding under a vending machine.

Odd News // 13 hours ago
Escaped elk runs loose next to Wisconsin highway before capture
June 17 (UPI) -- Authorities in Wisconsin said an elk that escaped from a farm went for a run along the highway before being safely recaptured.

Odd News // 13 hours ago
Lost class ring found on Wisconsin campus after 45 years
June 17 (UPI) -- A Wisconsin college employee using his metal detector on the campus found a high school class ring underground that turned out to have been lost 45 years earlier.

Odd News // 13 hours ago
Briefcase of old photos rescued from trash at New York park, returned to family
June 17 (UPI) -- A New York man who found a briefcase filled with old photos in a public park trash can was able to reunite the photos with family members of the owners.

Odd News // 14 hours ago
Woodpecker destroys nature camera at Russian nature reserve
June 17 (UPI) -- A nature reserve in Russia said a nature camera disguised as a piece of bark had an unintended consequence when it was destroyed by a hungry woodpecker. 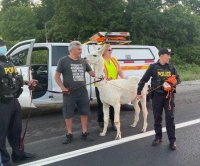