Nearly-discarded book sold for $1,250 by library

A Tennessee library said a book that was nearly thrown in the trash ended up being sold for $1,250. Photo by Valkr/Shutterstock

March 5 (UPI) -- A Tennessee library book that nearly ended up in the trash was sold for a whopping $1,250 when it was found to be a first edition.

The Friends of the Memphis Public Library book store said the copy of Philip K. Dick's Do Androids Dream of Electric Sheep?, the novella that served as the basis for the film Blade Runner, had been taken off the library shelves and placed in a bin for books to be sold or thrown away.

Louise Brown, the group's manager of online sales, said staff member Geoff Hopkins examined the tome and discovered it was a 1968 first edition.

Brown said she went on Amazon and discovered similar copies of the book were being sold for up to $3,000.

She said she listed the copy for $1,250 in the hopes of making a quick sale, and it sold for the full amount in about three weeks.

Brown said the sale was a new record for a single book sold by the library.

"This thing was going to be thrown away, and I can't imagine how many programs that it will fund for the library," Brown told the Memphis Commercial Appeal. "It's what we're calling the 'sale of the decade.'" 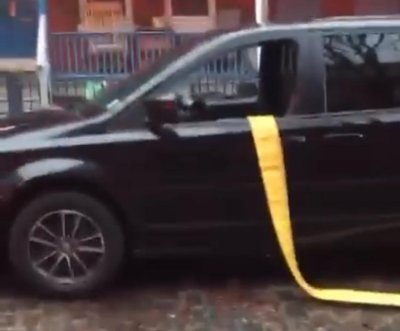 Odd News // 16 hours ago
Firefighters run hose through vehicle parked next to hydrant
Jan. 27 (UPI) -- Firefighters in New Jersey shared a video reminding residents why they shouldn't park next to fire hydrants.

Odd News // 20 hours ago
Friends play Uno in the road during long red light
Jan. 27 (UPI) -- A viral video highlights the traffic woes in a Florida city by showing a group of friends sitting down for a game of cards during a long red light.