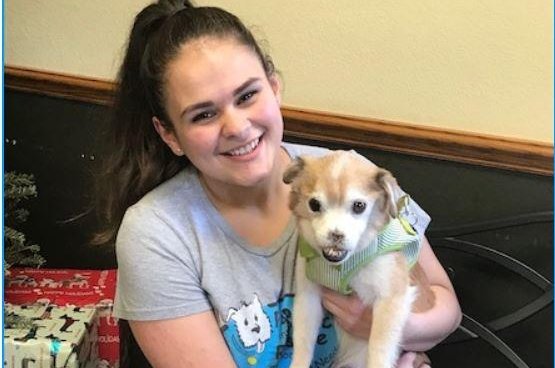 Genesis Diaz, who has been fostering Sniffles, said "this morning I woke up and he was at the edge of my bed, staring at me, and he ran over and did a little twirl and started licking my face." Photo courtesy Poodle and Pooch Rescue

Dec. 26 (UPI) -- A rescue shelter in Central Florida is seeking a home for Sniffles, a dog without a nose, that tends to snort and has crooked teeth but is laid back and loves people.

Poodle and Pooch Rescue in Chuluota took in the 12-year-old dog on Dec. 19.

"He's just a precious old man. Everyone at the vet's office has fallen in love with him," Michelle Wacker, special needs director for the shelter, said to WESH-TV in Orlando.

After helping him overcome hookworms and whipworms, Sniffles was featured in a Christmas Eve profile aired by the TV station.

The story went viral and there has been an outpouring on social media with posters writing he is a "sweet old guy," "adorable" and one to "die for."

"The outpouring of support has been overwhelming and heartwarming," the shelter posted on its website. "Sniffles is going to be a-okay and we ask that you please set your sights on some of our other dogs in need."

Poodle and Pooch Rescue said it is sorting through 200-plus emails, voice messages, social media inquires and applications "to determine the absolute best and most suitable home for Sniffles."

The shelter found out Sniffles was originally from Puerto Rico, where he likely lost his nose due to trauma -- possibly from a pack of dogs.

He was rescued by a group known as Rabito Kontento, which is Spanish for Happy Tails.

Sniffles was adopted in Florida but he managed to continually escape from his new owners.

He eventually ended up as a stray captured by Orange County Animal Services and taken in by Poodle and Pooch Rescue, Wacker said.

"This morning I woke up and he was at the edge of my bed, staring at me, and he ran over and did a little twirl and started licking my face," Genesis Diaz, who has been fostering the dog, told WESH-TV.

Sniffles needs dental work and his appearance will improve.

"Ninety percent of the time, we can fix these dogs," Wacker said. "When we see a special needs dog that we know we can help, we move to bring it in. Otherwise, it likely faces euthanasia."

Odd News // 31 minutes ago
Goats wander into Utah elementary school
Jan. 22 (UPI) -- A Utah school district shared photos from an elementary school that received an unusual visit from a pair of escaped goats.

Odd News // 18 hours ago
Christmas gift from boss earns man $200,000 lottery jackpot
Jan. 21 (UPI) -- A North Carolina man ended up getting a $200,000 Christmas bonus when a scratch-off lottery ticket from a gift bag his boss gave him turned out to be a top prize winner.

Odd News // 19 hours ago
Toronto woman finds knife-wielding squirrel in back yard
Jan. 21 (UPI) -- A Toronto woman captured video when she looked into her backyard and was confronted with a bizarre sight: a squirrel holding a knife.

Odd News // 20 hours ago
Reddit helps reunite backpacker with long-lost travel diary
Jan. 21 (UPI) -- An Australian man who found an old travel diary in a cupboard at a rental property was able to reunite it with the backpacker who lost the journal about 20 years earlier.

Odd News // 23 hours ago
Loose cow in Massachusetts captured after six months
Jan. 21 (UPI) -- A cow that was on the loose in a Massachusetts town for more than six months was finally lured into a trailer and will receive a new home at a sanctuary.