Teen's driver's license revoked in under an hour

Police in Germany said a lead-footed teenager's driver's license was revoked less than an hour after it was issued. Photo by Tobias Arhelger/Shutterstock.com

Nov. 21 (UPI) -- A German police department shared the cautionary tale of a teenager whose driver's license was revoked just 49 minutes after it was issued.

Police in the Markischer Kreis region said in a Facebook post that the 18-year-old was caught going 60 mph in a 30 mph zone just 49 minutes after he passed his driver's exam and was given a license.

The post said the driver, who was apparently showing off for his young passengers, has his license revoked for four weeks and he will have to attend training sessions before he can get it back.

"Some things hold for eternity... some not even an hour," police wrote.

The post said the teen was also slapped with a $228 fine.

Odd News // 18 hours ago
Alligator found hiding under vending machine at Florida gas station
June 17 (UPI) -- Three sheriff's deputies in Florida responded to a convenience store to help sort out an unusual problem -- an alligator hiding under a vending machine.

Odd News // 19 hours ago
Escaped elk runs loose next to Wisconsin highway before capture
June 17 (UPI) -- Authorities in Wisconsin said an elk that escaped from a farm went for a run along the highway before being safely recaptured.

Odd News // 19 hours ago
Lost class ring found on Wisconsin campus after 45 years
June 17 (UPI) -- A Wisconsin college employee using his metal detector on the campus found a high school class ring underground that turned out to have been lost 45 years earlier.

Odd News // 20 hours ago
Briefcase of old photos rescued from trash at New York park, returned to family
June 17 (UPI) -- A New York man who found a briefcase filled with old photos in a public park trash can was able to reunite the photos with family members of the owners. 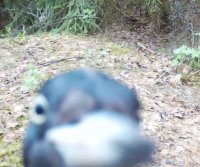 Odd News // 21 hours ago
Woodpecker destroys nature camera at Russian nature reserve
June 17 (UPI) -- A nature reserve in Russia said a nature camera disguised as a piece of bark had an unintended consequence when it was destroyed by a hungry woodpecker.