Sept. 21 (UPI) -- Reptile experts in Arizona came to a rescue of a rattlesnake that was found stuck in the narrow opening of a sprinkler cover.

The Phoenix Herpetological Society posted photos to Facebook showing the rescue of the diamondback rattlesnake stuck in the metal sprinkler cover.

The post said rescuers attempted to free the serpent on-site using oil, but they were unable to extract the serpent, leading them to bring it back to their facility.

"After about 20 minutes of careful maneuvering to not rip his skin/scales, this Diamondback was free!!" the Facebook post said. "He got a complementary bubble bath to get rid of the oil and then was released after he was confirmed to be alright."

Odd News // 4 hours ago
Johns Hopkins students invent edible 'Tastee Tape' to keep burritos together
May 17 (UPI) -- A team of Johns Hopkins University students are aiming to change the way people eat their burritos with a new invention: edible tape.

Odd News // 4 hours ago
116-year-old 'ghost tracks' unearthed following pesky coastal storm
Mysterious World War I-era railroad tracks hidden in the Atlantic Ocean? It's not quite the plot of a thriller, but rather an actual discovery found along a beach in Cape May, N.J., in the wake of a storm last week. 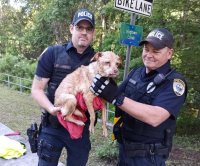 Odd News // 4 hours ago
Struggling dog rescued from Florida creek
May 17 (UPI) -- Police in Florida came to the rescue of a soggy canine spotted struggling to keep its head above the water in a creek.

Odd News // 5 hours ago
'Kitten' rescued by California woman was a baby fox
May 17 (UPI) -- Police in California said a woman "got quite a surprise" when she discovered the "kitten" she rescued was actually a baby fox.

Odd News // 6 hours ago
Venezuelan man named world's oldest at the age of 112
May 17 (UPI) -- Guinness World Records announced a Venezuelan man has been dubbed the oldest person living (male) just a few days shy of his 113th birthday.