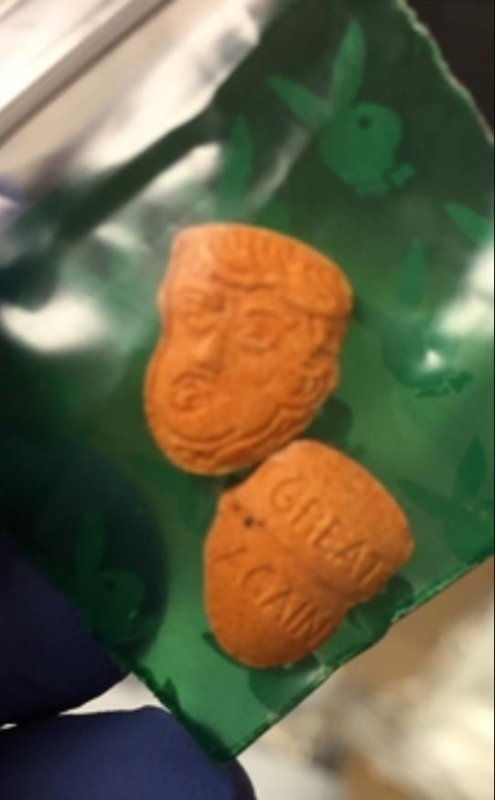 Indiana State Police, working with several other agencies, announced an operation that resulted in 129 drug-related arrests and the seizure of drugs including ecstasy pills shaped like President Donald Trump's head. Photo courtesy of the Indiana State Police

July 2 (UPI) -- The Indiana State Police said a multi-agency operation led to 129 arrests and the seizure of drugs including ecstasy pills shaped like President Donald Trump.

The state police said authorities with nine agencies conducted patrols on U.S. 31 in the central part of the state June 19-21 and June 26-28 to catch suspects using the road to transport drugs.

The agencies participating in Operation Blue Anvil made 129 arrests on 272 drug-related charges, including 48 felonies.

Police also issued 193 traffic citations and made three arrests on driving while impaired charges during the operation.

German police announced in August 2017 that they had seized about 5,000 similar Trump-shaped pills during a traffic stop in Osnabrueck.

Odd News // 6 hours ago
Bearded dragon rescued from 'SpongeBob' pineapple toy
May 26 (UPI) -- Veterinarians at a Massachusetts animal hospital rescued a bearded dragon from an unusual situation when the lizard got his head stuck inside a toy pineapple.

Odd News // 7 hours ago
Australian teen's 5.8-pound mushroom might be world's largest
May 26 (UPI) -- An Australian 14-year-old is waiting to hear back from Guinness World Records about whether the nearly 6-pound mushroom he found while walking home from school is the largest in the world.