May 14 (UPI) -- Wildlife officials in Idaho confirmed a mountain lion was tranquilized and relocated after climbing a tree at Idaho State University.

Officials with the Pocatello school said a jogger called campus police about 10:45 a.m. Friday to report a cougar wandering near the school.

The Idaho Department of Fish and Game said wildlife officers responded to the school along with Pocatello police to locate the big cat.

Authorities found the adult male mountain lion when it climbed a tree near campus. It was shot with tranquilizer darts and removed from the scene, officials said.

The cougar was released in a remote area of Southeast Idaho later in the day, officials said. 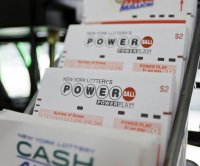