March 29 (UPI) -- Doctors at a Houston hospital shared video of a woman playing the flute while on the operating table during a brain surgery procedure.

The Texas Medical Center said Anna Henry, 63, was undergoing a procedure known as "deep brain stimulation" in the hopes of treating a condition known as essential tremor, which caused Henry's hands to shake and prevented her from doing activities including eating soup with a spoon and playing her beloved instrument.

Doctors said the procedure involves implanting tiny electrodes in the brain that deliver a constant electric current. They said the science behind how the procedure works is still being studied, but it has been found to be effective for treating symptoms of conditions including essential tremor and Parkinson's disease.

The surgeons had Henry bring her flute, an instrument she has practiced since she was 11 but had to give up in recent years due to her shaking hands. They shared a video of her playing the instrument during the procedure to test if the electric current was helping.

"[Deep brain stimulation] works amazingly well," said Henry's neurologist, Mya Schiess, M.D., of the Mischer Neuroscience Institute at Memorial Hermann-Texas Medical Center and UTHealth. "If you have a tremor that is truly interfering with hand function, lifestyle, head or voice, honestly, there isn't a medicine out there that's going to really put you in a better state."

Odd News // 16 hours ago
Goodwill worker finds $5,000 left in donated jacket pocket
March 3 (UPI) -- Employees at a Goodwill store in Texas said it took weeks of searching to find $5,000 cash that was mistakenly left in the pocket of a jacket that was donated to the store.

Odd News // 21 hours ago
Passenger flight turns around in Sudan when stowaway cat attacks pilot
March 3 (UPI) -- A passenger plane in Sudan turned back 30 minutes into the flight and made an emergency landing when a stray cat stowaway caused a ruckus in the cockpit. 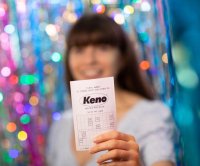