March 7 (UPI) -- A rat snake with two functional heads has gone on display at the Cameron Park Zoo in Waco, Texas.

The zoo made the announcement on Facebook Tuesday alongside a photo of the two-headed snake and details about the rare reptile including how it can eat using either head.

The snake appears to have two identical looking heads with space in-between each other while connecting to the same body.

Cameron Park Zoo's reptile and animal care manager Brian Henley said to Waco's KWTX 10 that rat snakes can grow as long as five feet and can live for 25 years. 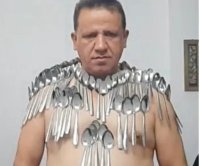 Odd News // 6 hours ago
Mystery animal that might be a dog escapes from Pennsylvania rescue
Jan. 27 (UPI) -- A mystery animal that experts said could be either a dog or a coyote escaped from a wildlife group's facility about a week after being rescued from the cold.