Nov. 13 (UPI) -- An Ohio town announced a deer seen wandering with a plastic pumpkin stuck on its face for several days was rescued by a group of police officers.

The City of Lyndhurst said in a Facebook post that three officers were able to corner the deer on Sunday and remove the plastic pumpkin from its face near Shaefer Park.

The deer had been seen wandering the area, mostly in South Euclid, for several days with the pumpkin stuck to its face. Residents were tracking the animal and made several unsuccessful attempts to rescue the animal.

"Lyndhurst Police received several calls from residents this morning about the deer, with the plastic pumpkin stuck on its face, that has been seen mostly in South Euclid," the post said. "Three Lyndhurst police officers were able to corner it near Shaefer Park, remove the plastic pumpkin, and free the deer."

The deer was first spotted only days after a deer was rescued from a similar predicament in Anderson Township, on the other side of the state.

Odd News // 40 minutes ago
Father, son reunited after nearly 48 years
Oct. 27 (UPI) -- A father and son who hadn't had any contact for nearly 48 years had an emotional reunion at a Pennsylvania airport, thanks an aunt's sleuthing on Facebook. 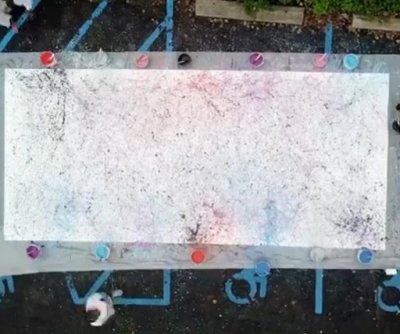