The company said Utopias, a beer brewed by Sam Adams every two years, is headed back to stores for its 10th iteration, which boasts an alcohol content of 28 percent.

"Brewing, aging, and blending Utopias is a multi-step, time-intensive and complex process," Sam Adams said on its website. "At 28 percent ABV, this brew is reminiscent of a rich vintage Port, old Cognac, or fine Sherry with notes of dark fruit, subtle sweetness, and a deep rich malty smoothness."

Odd News // 13 hours ago
Mom's video captures 6-year-old fleeing from shark at Hawaii beach
May 5 (UPI) -- A mother recording her 6-year-old daughter playing in the waves at a Hawaii beach captured the moment the girl was chased out of the water by a shark.

Odd News // 16 hours ago
Arkansas police capture loose pig, avoid being 'hambushed'
May 5 (UPI) -- Police in Arkansas responded to a call about a loose pig and recounted the capture the effort in a pun-filled social media post.

Odd News // 17 hours ago
Animal rescuers in Iowa find reported loose gator was plush toy
May 5 (UPI) -- Animal services officers in Iowa were called to an apartment complex on a report of an alligator on the loose, but they arrived to find the reported reptile was a life-sized plush toy. 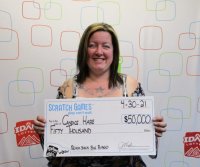