Oct. 31 (UPI) -- An Alabama woman captured photos and videos of an unusual visitor to her neighborhood -- a massive hog.

"I was in Fontaine Park in Phenix City. I'm not sure if anyone called Animal Control," Price told WTVM-TV.

Rena said she doesn't know where the hog came from or where it ended up.

"I just had to turn back around and take some pics," she said. "There were a couple cars slowing down looking as they were leaving Fontaine Park." 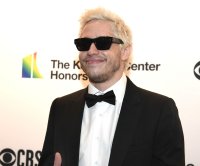