Oct. 27 (UPI) -- Animal control officers were called to an Alaska airport for an unusual runway obstruction: a 450-pound seal lounging on the tarmac.

Officials at Wiley Post-Will Rogers Memorial Airport in Utqiagvik said North Slope Animal Control officers responded with a sled to remove the bearded seal spotted sunbathing in the middle of the runaway.

Airport worker Scott Babcock posted a photo and video of the seal to Facebook.

The photo was later shared on Tuesday by the Alaska Department of Transportation, which quipped pilots should beware of "low sealings" at the airport.

Officials said animals including polar bears, caribou and musk ox have previously been spotted on the runaway, but the big seal was a first.

Odd News // 18 hours ago
Man uses lottery numbers from dream to win $3.4 million jackpot
Dec. 6 (UPI) -- An Australian man said a dream about winning the lottery provided him with the numbers he used to win a jackpot of nearly $3.4 million.

Odd News // 18 hours ago
Missing cat reunited with Texas family after six years
Dec. 6 (UPI) -- Animal rescuers in Texas said a cat recently picked up as a stray was reunited with her family, who revealed the feline had been missing for six years. 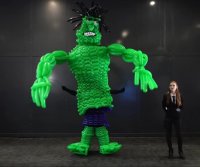 Odd News // 19 hours ago
11-foot, 7-inch Hulk costume made from balloons breaks Guinness record
Dec. 6 (UPI) -- A British cosplayer broke his own Guinness World Record when his Incredible Hulk costume made entirely of balloons was measured at 11 feet, 7 inches tall.

Odd News // 22 hours ago
Kitten rescued after more than week trapped in storm drain
Dec. 6 (UPI) -- Animal rescuers and firefighters teamed up in Arizona to rescue a kitten trapped in a storm drain for more than a week.

Odd News // 23 hours ago
Police chase loose camel through Kansas city
Dec. 6 (UPI) -- Police in Kansas said they spent "the entire day" Sunday chasing an escaped camel that trotted across a golf course, ran down a highway and visited a few neighborhoods.