Oct. 9 (UPI) -- A Florida man whose trash was being raided by a bear invited a neighbor over for a family photo shoot in front of the feasting bruin.

Dustin Radney posted a series of photos and videos to Facebook showing the massive bear feasting on trash from the overturned bin outside of his Apopka home.

The photos include a shot of Radney posing with his son in front of the bear and a photo with some neighbors he invited to join in the fun.

"Just a bear hanging out in the neighborhood -- a 400 pound bear," Radney says in one of the videos.

"This is what's wrong with nature today -- They don't eat healthy," he says. "That's why they're so fat. They're obese."

"It was really entertaining," Radney told WKMG-TV. "He was just chilling and eating some trash, and after he was done eating the trash, he took about an hour nap."

Radney also photoshopped a picture of his young son riding on the bear -- an image that many concerned commenters confused for a real scene.

Radney said Orange County deputies were monitoring the bear and he and his neighbors kept a distance of at least 50 feet from the animal at all times.

The Florida Fish and Wildlife Conservation Commission said bears are currently stocking up on calories in preparation for winter.

Odd News // 4 hours ago
Mechanics free kitten trapped inside owner's dashboard
Sept. 29 (UPI) -- A team of mechanics at a Utah car dealership disassembled the dashboard of a woman's car to rescue a kitten that climbed into the inner workings of the vehicle and got stuck.

Odd News // 4 hours ago
Paddleboarder's lost phone fished out of sea by beachgoer
Sept. 29 (UPI) -- A man who dropped his phone into the sea while paddleboarding in Britain was reunited with the device after it was found by a beach-goer who discovered it still worked.

Odd News // 5 hours ago
Profane parrots removed from zoo display for rude language
Sept. 29 (UPI) -- A British zoo said five parrots were removed from public display after the birds spent their time in quarantine together teaching each other to shout profanities.

Odd News // 6 hours ago
Car rolls into Utah reservoir while owner snaps photos
Sept. 29 (UPI) -- Authorities in Utah shared photos of a car that "decided to go for a swim" when its owner got out of the vehicle to take some photos next to a reservoir. 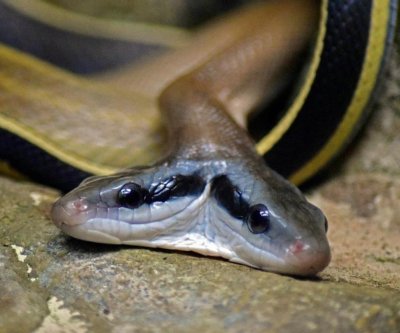 Odd News // 9 hours ago
Parrot interrupts Croatian soccer game by landing on player
Sept. 29 (UPI) -- A soccer game in Croatia was interrupted when an escaped parrot celebrated a team's goal by swooping down onto the field and landing on a parrot's back.