Aug. 24 (UPI) -- A man fishing with his young nephew in Connecticut recorded video of the toddler's reaction to reeling in his first fish -- with a snake attached.

Brian Kisner posted a video to YouTube showing what happened when his nephew, Paul, reeled in his first fish from Holbrooks Pond in Hebron.

Paul turns out to have caught more than just a fish -- he also reeled in a snake that was attached to the fish by its fangs.

The toddler, who is not nearly as amused as his uncle, becomes upset as the snake starts to drag the fish away.

"Bring my fish back right now!" the boy demands while starting to cry.

Kisner calms his nephew by promising they will catch more fish.

"With no snake?" the boy asks, hopefully.

"With no snake," Kisner confirms. 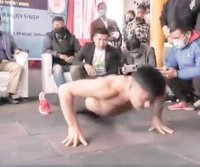