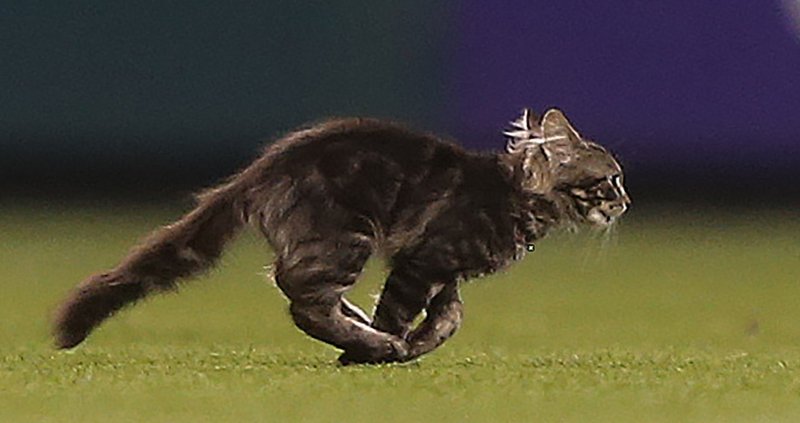 A kitten runs onto the field in the sixth inning during the Kansas City Royals-St. Louis Cardinals baseball game at Busch Stadium in St. Louis on August 9, 2017. The team reported the kitten was missing the next day after a fan attempted to take it home after the game. Photo by Bill Greenblatt/UPI | License Photo

Aug. 11 (UPI) -- The St. Louis Cardinals said a kitten that ran onto the field, spurring their comeback win on Wednesday has gone missing.

The team released a statement announcing the young gray tabby known as "Rally Cat" had disappeared after helping to lift the Cardinals to a win over the Kansas City Royals.

"We are hopeful someone will find the cat and contact us so we can properly care for it," the team said. "Our grounds crew is working on developing a stray animal protocol to ensure the safety of both crew and animal should this happen again."

Lucas Hackmann, the grounds crew member who retrieved Rally Cat, set the kitten down near a statue to seek first aid after it repeatedly bit and scratched his hands.

Korie Harris, 35, reportedly went to claim the kitten after being enchanted by its on-field antics.

"I thought, 'I'm taking this cat home. It's just scared," she said.

Unfortunately for Harris, the feisty feline managed to leap out of her arms somewhere in Citygarden and never returned despite attempts to bait it out with treats.

"I waited for hours but he never came out," she said.

St. Louis Feral Cat Outreach plan to send volunteers to set up three traps in the area where Rally Cat was last seen in hopes of capturing the beloved kitten.

"We've caught cats in crazy situations before," spokeswoman Savannah Rigley said. "So I wouldn't count us out."