Union files grievance over university's use of goats to clear weeds

A herd of goats hired to help clear overgrowth on Western Michigan University's campus has run afoul of a local labor union, which has filed a grievance against the school. Photo courtesy of Nick Gooch/WMU

July 12 (UPI) -- A labor union's grievance filed against a Michigan university accuses the school of outsourcing laid-off landscapers' jobs to a herd of hungry goats.

Western Michigan University announced earlier in the summer that a herd of goats from rental company Munchers on Hooves LLC would be taking care of lawn mowing at 15 woodland acres on the Kalamazoo school's campus.

Kathi Babbit, chief steward of the American Federation of State, County and Municipal Employees local 1668, said in a newsletter that she has filed a grievance accusing the school of using the goats to maintain lawns that would have otherwise been mowed by employees currently on lay-off.

"I also filed a grievance as it relates to subcontracting and the use of goats which was not reported to the Local and again, we have people on layoff," Babbit wrote in the newsletter, which was provided to the Kalamazoo Gazette by WMU Horticulturist Nicholas Gooch.

"AFSCME takes protecting the jobs of its members very seriously and we have an agreed-upon collective bargaining agreement with Western Michigan," Union President Dennis Moore told the Battle Creek Enquirer. "We expect the contract to be followed, and in circumstances where we feel it's needed, we file a grievance."

WMU spokeswoman Cheryl Roland said the goats were chosen as an environmentally friendly way to maintain the wooded lands, not to save money on employees.

"No WMU workers have been displaced by the goat project," Roland said.

She said she could not comment on the grievance in detail due to WMU procedures for handling such complaints.

Gooch said the program has been otherwise successful.

"We have been very happy with the progress, impact and PR generated from this project from both the campus community and the community as a whole," he said. "There have been no complaints of any nature prior to the news of this union ordeal."

Odd News // 4 hours ago
Driver doing donuts blocks busy highway in Texas
Jan. 29 (UPI) -- Police in Texas are investigating a viral video that shows traffic stopped on a busy highway while a driver does donuts in the roadway. 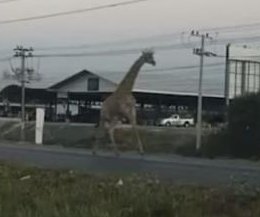