Hempstead Town Supervisor Anthony J. Santino on Fridayshared photos of the moment he and Butch Yamali of Peter's Clam Bar "pardoned" Louie and released the 22-pound lobster back into the sea.

"Don't be shellfish. Help the Town of Hempstead protect our wildlife. This National Lobster Month we set free 22-pound, 132-year-old Louie the Lobster at Peter's Clam Bar so he could live back," a post on Santino's official Facebook page stated.

Yamali, owner of the clam bar, said a customer came in asking to purchase Louie last week, but he refused to sell the lobster who, he said, had become "like a pet" and was ready to return to its home, the New York Post reported.

"Louie has been here about 20 years, he looks ready to go," he said.

The elderly lobster had been at the restaurant for more than a decade when Yamali purchased the establishment four years ago and received a fitting send off as residents and town officials gathered to watch him return to his home in the ocean.

"Today I'm announcing an official pardon for Louie the Lobster," Santino said. "Louie may have faced a buttery fate on a seafood lover's plate, but today we are here to return Louie to a life that is better down where it's wetter."

An expert said Louie will likely survive despite spending much of his life in captivity and having lost a claw, due to a lack of natural predators.

Odd News // 3 minutes ago
Police arrest 'Elsa' as prime suspect behind winter storm
After a snowstorm froze over the eastern portion of the United States, South Carolina police released bodycam footage showing the arrest of a well-known ice queen -- Elsa from Disney's "Frozen."

Odd News // 16 hours ago
North Carolina man's family of pranksters didn't believe his lottery win
Jan. 19 (UPI) -- A North Carolina man said his family's tendency for pranking each other made it difficult to convince them he had won a $250,000 lottery prize. 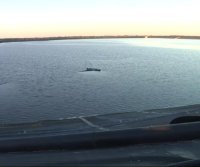 Odd News // 17 hours ago
Alert system mistake warns Missouri residents Joker is on the loose
Jan. 19 (UPI) -- The Missouri State Highway Patrol is reassuring the public that Batman villain Joker is not on the loose after a staff member sent an emergency alert mobile devices.

Odd News // 20 hours ago
Teenager breaks his own blindfolded puzzle cube speed record
Jan. 19 (UPI) -- A teenager participating in a Florida competition broke his own Guinness World Record for fastest time to solve a rotating puzzle cube while blindfolded.