A man in Maine helped free four baby squirrels he found with their tails tangled together outside his parents' house. Screen capture/A Day/YouTube

May 23 (UPI) -- A Maine man discovered four squirrels with their tails tangled together on a sidewalk near his parents' house.

Video shared to YouTube by Andrew Day showed the four baby squirrels joined together by their tails walking in opposite directions as they struggled to untangle themselves outside the Bangor home.

Day, 41, told Bangor Daily News he arrived at the scene to find a cat lurking nearby and a distressed adult squirrel, which he believed was the mother.

"If you watch the video, you can hear her sort of screaming in the background," he said. "She was nearby with them, sort of escorting them across the street. When the cat arrived, she jumped up a tree and was kind of squawking the whole time."

Day and his father eventually got in contact with the area game warden, but when the warden said it would take about an hour to arrive at their location the father and son decided to rescue the squirrels on their own.

"My father and I took their advice in what they said they'd do, so we got them in a box," Day said.

Once the squirrels were calm and inside the box, Day inspected their tails and worked to untangle them.

"I got some scissors and I trimmed tail hair off the squirrels for about an hour and a half," he said. "It was quite the operation. I'm happy to report they were fine."

Once the squirrels were free Day released them back to their mother at the game warden's instruction. 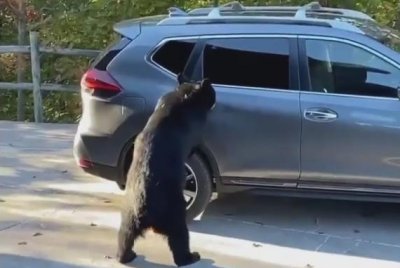