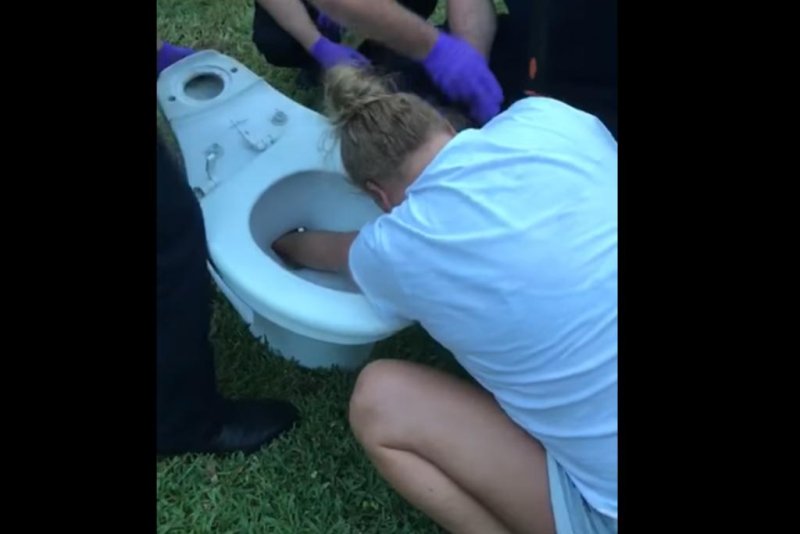 Firefighters work to free a Texas woman's arm from inside the drain of her toilet. Screenshot: ViralHog/YouTube

April 18 (UPI) -- A Texas woman who attempted to fix a toilet clog by hand ended up having to call firefighters to break the commode and free her stuck arm.

Gracie Henderson of New Caney she she has been having numerous problems since moving into her new house.

"A water pipe busted in the wall the day I moved in. I got my car stuck in the mud in the front yard. My brand new lawn mower stopped working," Henderson told the Houston Chronicle.

Henderson found the worst was yet to come April 12 when her toilet clogged and she didn't have a plunger. Henderson said she didn't want to shell out for a plumber, so she attempted to clear the clog by reaching into the toilet drain.

"I was just gonna see if I could feel a wad of toilet paper or something I could just pull out. But then my hand wouldn't come back out," she said.

Henderson said her watch was stuck on something inside the toilet.

Firefighters responded to the home and set about the task of freeing Henderson while her friend, Nicole Mullins filmed video that she later posted to Facebook.

The video shows the firefighters remove the toilet from the restroom and carry it outside, where they broke a hole in the commode with a sledgehammer to free Henderson's arm.