The La Porte County Sheriff's Office said the Taraboczhia family was headed back to Emerson, N.J., from Notre Dame, where their daughter, Riana, was just accepted, when the turkey appeared in the path of their rental vehicle on U.S. 20.

"And out of nowhere this turkey starts flying. I see the wings open up, coming right at me," John Tarabocchia told WLS-TV.

"I thought he was gonna clear the roof, but he didn't," Tarabocchia told the Indianapolis Star. "He went straight through the windshield."

The family members suffered only minor cuts from the glass.

"Mating season for wild turkeys means that they are often on the move and can be as hazardous as deer," the sheriff's office said.

The family was able to get another rental vehicle and the rest of the drive home was far less eventful, they said.

Another "hazardous as deer" turkey met with a similar situation in New Hampshire recently when it crashed through a semi truck's windshield and ended up in the passenger seat. The New Hampshire turkey, unlike its unlucky Indiana cousin, survived the encounter. 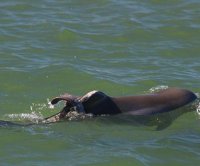 Odd News // 19 hours ago
Mystery animal that might be a dog escapes from Pennsylvania rescue
Jan. 27 (UPI) -- A mystery animal that experts said could be either a dog or a coyote escaped from a wildlife group's facility about a week after being rescued from the cold.

Odd News // 21 hours ago
Florida teacher has snowman mailed to class from Kentucky
Jan. 27 (UPI) -- A Florida teacher who discovered most of her students had never seen snow gave them an unusual surprise by having her sister mail the class a snowman.