Attention game show contestants: "A Streetcar Naked Desire" is not a thing. 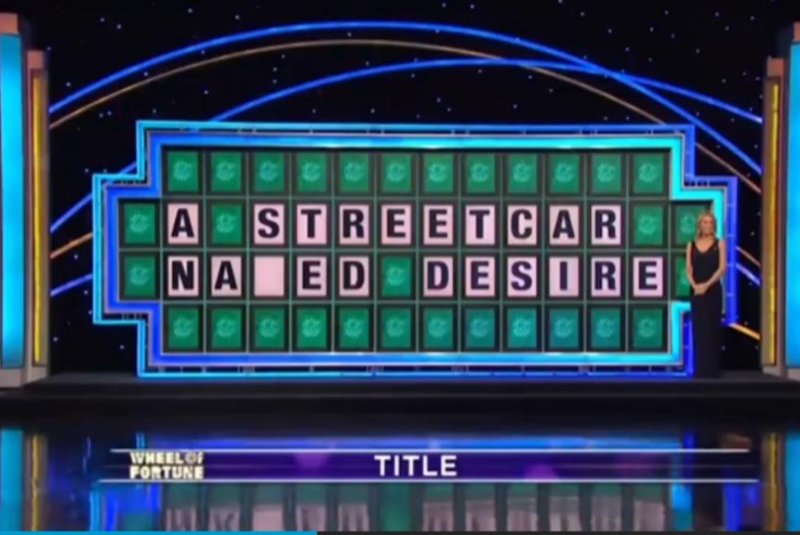 A Wheel of Fortune contestant became a viral star Tuesday night when he flubbed the name of Tennessee Williams' A Streetcar Named Desire. Screenshot: Yahoo!

March 22 (UPI) -- A Wheel of Fortune contestant might not be a Tennessee Williams fan, but he's sure to never forget one of the writer's best-known plays -- at least, not again.

A contestant named Kevin was launched to instant viral fame Tuesday night when he was called on to guess the final missing letter of the puzzle: "A STREETCAR NA_ED DESIRE."

Kevin was met with a silence followed by gasps and groans from the audience when he called out his letter: "K."

A competitor named Lisa profited from Kevin's mistake, solving the puzzle with the actual name of Williams' 1947 play: "A Streetcar Named Desire."

"Although you got the right answer," he said. "I'd rather see Kevin's play."

Odd News // 4 hours ago
Lost lamb spends the night in Irish jail cell
April 19 (UPI) -- Police in Ireland said a lost lamb found wandering loose in a roadway spent the night in a jail cell before being reunited with its owners.

Odd News // 5 hours ago
Florida firefighters rescue ducklings from storm drain
April 19 (UPI) -- Firefighters in Florida came to the rescue of a family of ducklings who fell into a storm drain near a bridge.

Odd News // 6 hours ago
Idaho man catches balls with bucket on his head to reclaim Guinness title
April 19 (UPI) -- A pair of Idaho men reclaimed a Guinness World Record when one of them caught 107 tennis balls in an oversized bucket placed on his head in one minute.

Odd News // 6 hours ago
Monitor lizard rescued from busy Singapore road
April 19 (UPI) -- A pair of police officers in Singapore were caught on camera rescuing a giant monitor lizard that wandered out into a busy road.