March 7 (UPI) -- A man dressed in a shark costume is wanted by New Zealand police after attempting to rob a gas station.

Canterbury Police shared a photo of the man and an accomplice as they entered a BP gas station armed with a hammer and a knife at 2:22 a.m. on Sunday morning.

"They have smashed a glass shelf which startled the attendant, who retreated to the staff room, where another colleague was having their break," police said.

After entering the the gas station the oddly dressed robber and his partner manage to steal some candy before making their escape.

"The two offenders have then left the service station with an unknown amount of confectionery," police said.

Authorities are seeking information about the two men, including any accounts of witnesses who may have seen the man dressed in the strange costume in the area. 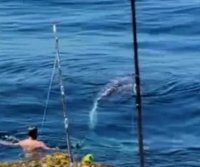