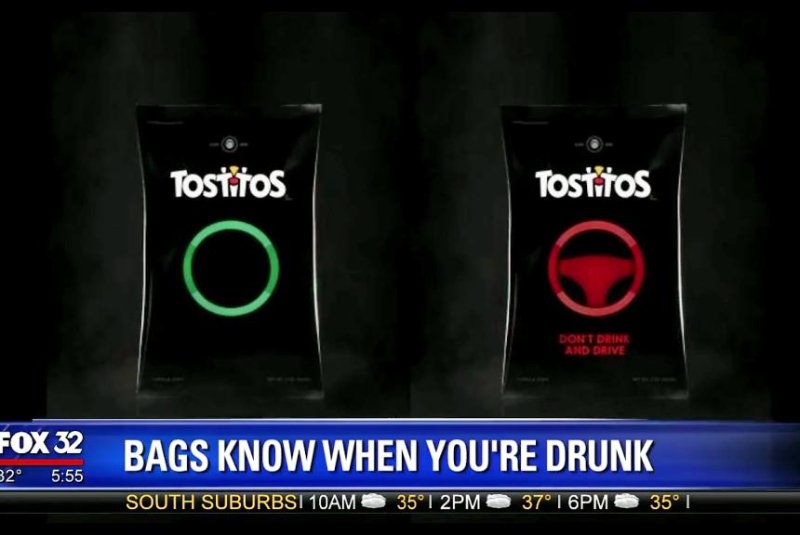 A Tostitos bag unveiled by Frito-Lay can detect when someone has been drinking. Screenshot: Jenny Milkowski Fox 32 Chicago/Facebook

Jan. 27 (UPI) -- Frito-Lay unveiled "Party Safe" Tostitos bag for the Super Bowl that detects whether its holder has been drinking and can even order an Uber.

The limited-edition "Party Safe" Tostitos bag, designed by Goodby Silverstein & Partners, contains a sensor connected to a microcontroller that detects trace amounts of alcohol on a person's breath, turning the front of the bag red and showing an image of a steering wheel and the message, "Don't Drink and Drive."

The bag also flashes an Uber code and contains technology that allows the holder to tap their phone against it to order an Uber for $10 off during and after the Super Bowl Feb. 5.

"We're proud to introduce to the world the first bag of chips that gets you home safe," Roger Baran, a Goodby Silverstein & Partners creative director, told Adweek "For a football fan, there is a lot of emotion involved with a game. It's easy to drink more than you planned. And a lot of times all you need to stop short of driving after drinking is a friend who calls you off. On Sunday of the big game, we want Tostitos to be that friend."

Frito-Lay said it is aiming to reduce the number of impaired drivers on Super Bowl Sunday, and even customers without the limited-edition bags will be able to snag the Uber discount.

"Our goal is to remove 25,000 cars from the roads that Sunday evening," said Jennifer Saenz, Frito-Lay's chief marketing officer. "Whether watching the big game at a friend's house or at a local bar, a safe ride home is just a few easy taps away. By simply entering a participating Tostitos UPC code in the Uber app, fans nationwide can receive $10 off an Uber ride."