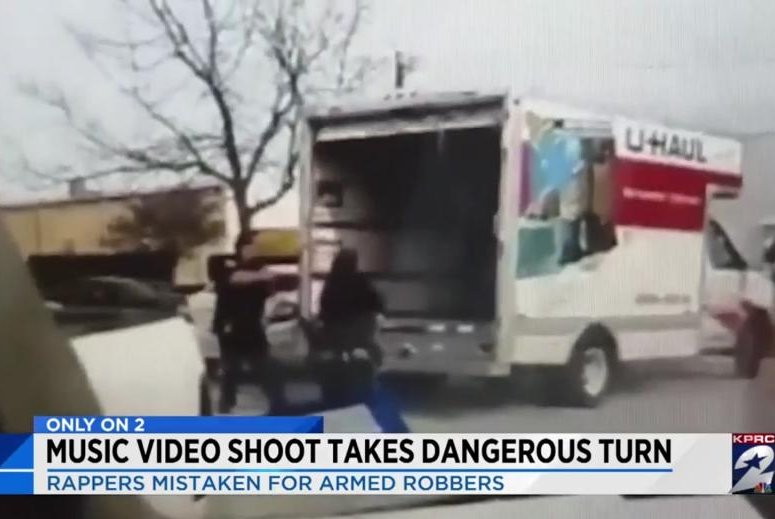 Armed police put a stop to an armed robbery that turned out to be staged for a rap music video. Screenshot: KPRC-TV

Angleton rappers Tru Keezy and Yung Groovey said they and members of their crew were filming scenes for a music video outside of a Lake Jackson credit union on New Year's Day when Lake Jackson police arrived on the scene with their guns drawn.

The rappers explained to police that they were shooting a music video with a bank robbery theme and their guns were not loaded.

"It was a bad idea with a good reason," Tru said.

Lake Jackson Police Sgt. Jon Kirk said the rappers explained they had thought the bank was closed when they decided to film, but the men dressed as robbers were spotted by a cleaning crew who triggered the credit union's alarm about 1:45 p.m.

The men were released without any charges.

Odd News // 10 hours ago
Confused kangaroo rescued from lake in Australian capital
Sept. 21 (UPI) -- A pair of Australian men came to the rescue of a confused kangaroo that was having trouble finding its way out of a lake in the country's capital.

Odd News // 13 hours ago
Escaped cat found after three weeks wandering around JFK airport
Sept. 21 (UPI) -- A cat that escaped from a carrier while being loaded onto an Italy-bound flight was safely captured after three weeks of wandering the tarmac at New York's John F. Kennedy International Airport.