The Charity Commission for England and Wales rules 'Jediism' not religion

Jedi Master Qui-Gon Jinn (Liam Neeson), Anakin Skywalker (Jake Lloyd), and Jedi apprentice Obi-Wan Kenobi (Ewan McGregor) as R2-D2 listens in this scene from "Star Wars: Episode I "The Phantom Menace." The Charity Commission for England and Wales ruled the real-life group the "Temple of the Jedi Order" was not eligible for charitable status as a religion. File Photo by Keith Hamshere/Lucasfilm/UPI | License Photo

LONDON, Dec. 20 (UPI) -- The Charity Commission for England and Wales ruled that the "Temple of the Jedi Order" are not an official religion.

The commission determined the religious group based on the beliefs of Jedi from the Star Wars films was not eligible for charitable status as an organized religion.

"The commission considered an application by the Temple of the Jedi Order for registration as a charity and concluded that the organization was not established for exclusively charitable purposes and could not be registered," the commission said. "The commission was not satisfied that Jediism is a religion in charity law."

Jediism ranked as the seventh most popular religion in a 2011 census in which 177,000 people declared themselves Jedi under the religion section, according to the BBC.

The Temple of the Jedi Order's website looks to establish the Jedi are not a group of Star Wars fanatics but rather an organization promoting "goodwill, understanding, compassion and serenity."

"We do not teach mystical powers or how to build lightsabers, we are not a dedicated Star Wars fan site, we are not affiliated with George Lucas or Disney and we are not for people who just want to wear a badge reading 'I'm a Jedi,'" the website states.

While making the decision the commission was forced to examine the definition of a religion and ruled Jediism "lacks the necessary spiritual or non-secular element" they determined to be indicative of a religion.

In addition, the commission ruled the Texas-based Jedi are "an entirely web based organisation and the Jedi are predominantly, if not exclusively, an online community."

"The meaning of 'religion' in charity law has developed over many years and now encompasses a wide range of belief systems," Kenneth Dibble, the Charity Commission's chief legal adviser told The Guardian. "The decisions which the commission makes on the extent of this meaning can be difficult and complex, but are important in maintaining clarity on what is and is not charitable."

Odd News // 17 hours ago
Mom's video captures 6-year-old fleeing from shark at Hawaii beach
May 5 (UPI) -- A mother recording her 6-year-old daughter playing in the waves at a Hawaii beach captured the moment the girl was chased out of the water by a shark.

Odd News // 19 hours ago
Arkansas police capture loose pig, avoid being 'hambushed'
May 5 (UPI) -- Police in Arkansas responded to a call about a loose pig and recounted the capture the effort in a pun-filled social media post. 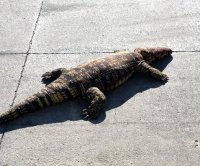 Odd News // 21 hours ago
Animal rescuers in Iowa find reported loose gator was plush toy
May 5 (UPI) -- Animal services officers in Iowa were called to an apartment complex on a report of an alligator on the loose, but they arrived to find the reported reptile was a life-sized plush toy.