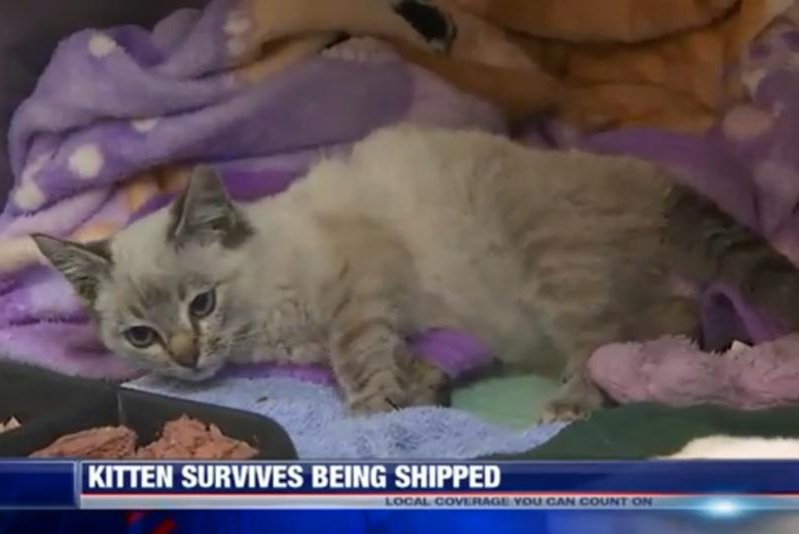 Joey the kitten is recovering after being shrink-wrapped to a UPS box and shipped 500 miles. Screenshot: WHBQ-TV

MEMPHIS, Dec. 8 (UPI) -- A weeks-old kitten is bound for a new home in Tennessee after he was found shrink-wrapped to a box that was shipped more than 500 miles.

The Park Avenue Animal Hospital in Memphis said the kitten was brought in by a UPS driver who heard a sound in the back of his truck and discovered the young feline, estimated to be 5-8 weeks old, shrink-wrapped to a box that originated four days earlier in Chicago.

"Last week a UPS driver who is a longtime client brought him in and he was driving a load that had come in from Chicago. The load had been packed about four days before," veterinarian Dr. Carolyn McCutcheon told WHBQ-TV.

The veterinarian said the kitten, dubbed Joey, was lucky to be alive.

"He was pretty dehydrated and hungry... He was shrink-wrapped flat with his four legs out. So it took a while for his legs to work again and for him to move his head again," she said.

"Probably he was in the warehouse, [the machine] scared him, he ran up the [packaging] and the machine just went around him and wrapped it," McCuthcheon said.

She said Joey is recovering well, but he still shows signs of his traumatic experience.

"He still won't let us give him a bath, and he still smells like plastic," the veterinarian said.

The animal hospital said Joey was adopted by a family Wednesday and will likely be sent to his new home next week.

Odd News // 2 days ago
Japanese zoo solves mystery of isolated gibbon's pregnancy
Feb. 3 (UPI) -- A Japanese zoo said it has solved the mystery of a gibbon became pregnant while living in isolation -- and a tiny hole in a board is to blame.

Odd News // 2 days ago
Loose cow in California breaks windshield, poops on Tesla
Feb. 3 (UPI) -- Police in California wrangled a loose bovine that managed to shatter a windshield and leave an unsavory mess in a "cow-llision" with a Tesla.

Owl escapes from Central Park Zoo after his exhibit vandalized