A pet cat named "Fat Boy" was rescued from the top of an electrical pole in a Fresno neighborhood on Tuesday after being stuck on the pole for nine days. Two linemen from Pacific Gas and Electric Co. shut down power in the area and scaled the pole to rescue Fat Boy. Screen capture/Kansas.com/Inform Inc.

FRESNO, Calif., Nov. 23 (UPI) -- Fire crews in California scaled an electrical pole to rescue a pet cat who had been stuck near the power lines for nine days.

Two linemen from Pacific Gas and Electric Co. responded to rescue the area Tuesday and cut power before climbing the pole to rescue the cat.

"We called everyone – anyone that could help, but they didn't come," Fat Boy's owner, 14-year-old Andrew Perez told the Fresno Bee. "He's a nice cat. He probably went up there because he got scared by a dog. I was scared."

Power to nearly 250 homes was shut off for several hours to ensure that Fat Boy was rescued safely.

"It's not a simple thing to climb a power pole and get a cat down," Pacific Gas and Electric Co spokesman Denny Boyles said. "The first thing we have to do is de-energize the line – it's a 12,000-volt line. The safety of the two guys who went up on the pole, and the crew member on the ground, has to be our first priority every time."

Once back safely on the ground Fat Boy was slightly dehydrated, but otherwise in good condition.

Odd News // 1 hour ago
Eagle sends drone to 'watery grave' in 'brazen attack' over Lake Michigan
Aug. 13 (UPI) -- Michigan state officials said a drone mapping shoreline erosion in the Upper Peninsula was sent to a "watery grave" in a "brazen attack" by a bald eagle.

Odd News // 2 hours ago
Anglers rescue drowning moose in Lake Superior
Aug. 13 (UPI) -- A pair of Ontario men out fishing in a boat ended up rescuing a moose struggling to keep its head above the waters of Lake Superior. 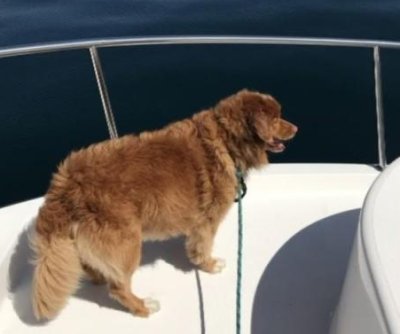 Odd News // 22 hours ago
Louisiana man warns of large lizard on the loose
Aug. 12 (UPI) -- A Louisiana man is warning neighbors to be on the lookout for his unusual escaped pet -- a Nile monitor lizard.

Odd News // 22 hours ago
German circus sells jars of lion poop for gardening
Aug. 12 (UPI) -- A German circus that has been closed for months due to the COVID-19 pandemic is making some extra money by selling lion poop.