Oblivious mom pays $250 for replica of Squidward's painting from 'Spongebob'

HOUGHTON LAKE, Mich., Nov. 22 (UPI) -- A Michigan Twitter user claims his mother paid $250 for a painting he immediately recognized -- from an episode of Spongebob Squarepants.

Twitter user @DANlEL7 of Houghton Lake tweeted a screenshot of a text message conversation with his mother where she reveals she purchased a painting for $250, "but the guy selling it said it could be worth $3,000 or more."

Daniel accompanied the screenshot with a photo of the painting hanging in his family's kitchen -- a replica of a self-portrait painted by Squidward in the Spongebob episode "Artist Unknown."

Squidward dubs the painting "Bold and Brash," leading a buyer to respond: "More like belongs in the trash."

Daniel's tweet earned him several replies referencing the buyer's line from the cartoon, leading him to post another photo of the painting, this time in the trash.

you guys are right, it belongs in the trash pic.twitter.com/GZbcLQdDAh

Odd News // 1 hour ago
Grocery bagger wins record jackpot from ticket bought at work
Feb. 28 (UPI) -- A Quebec grocery store worker became the largest lottery winner in the province's history when he scored a $52 million jackpot with a ticket he bought at work.

Odd News // 2 hours ago
More than 150 snakes removed from under Colorado couple's deck
Feb. 28 (UPI) -- A Colorado couple who kept finding snakes in and around their home called in experts, who removed more than 150 of the reptiles from a large den under their back deck. 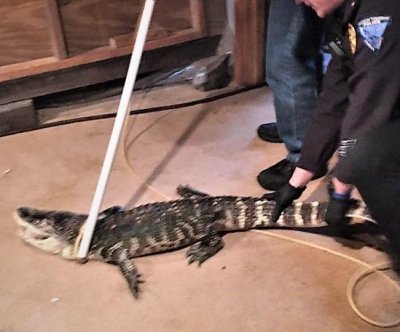 Odd News // 4 hours ago
Ohio man seeks world record with beer-only Lent diet
Feb. 28 (UPI) -- An Ohio man said he is giving up solid food for Lent and switching to a beer-only diet in an attempt to set a world record.

Odd News // 5 hours ago
Wrestling fans stage match inside Texas Walmart
Feb. 28 (UPI) -- A group of wrestling fans in Texas staged their own exhibition match in the middle of a Walmart store and shared video of the spectacle online.

Odd News // 6 hours ago
Puppy's pigeon friendship leads to custom wheelchair
Feb. 28 (UPI) -- A puppy who went viral for an unlikely friendship with a flightless pigeon is finally learning to walk thanks to a donation of a specialized wheelchair.