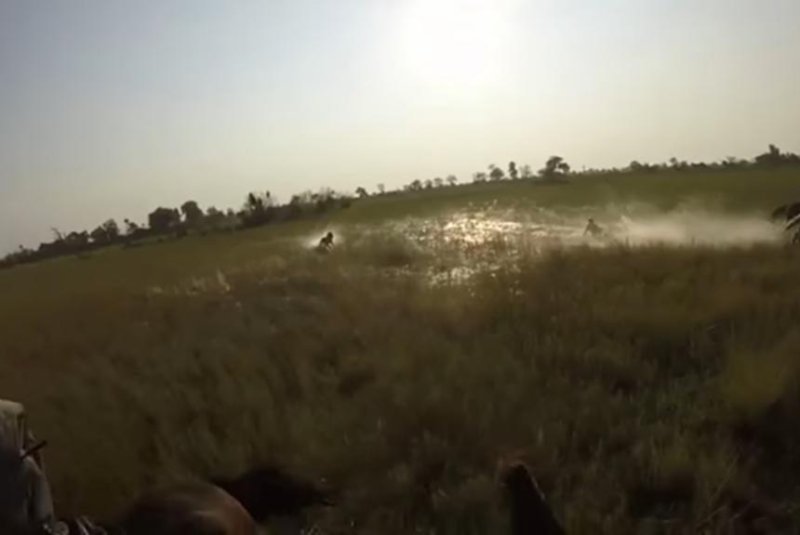 A lioness runs toward a man who fell from his horse in Botswana. Screenshot: Kruger National park/YouTube

GABORONE, Botswana, Nov. 16 (UPI) -- A U.S. couple taking a horseback safari in Africa captured video of the husband's lucky escape from harm when a lion attacked and he fell from his mount.

The video was posted to YouTube this month by South Africa's Kruger National Park, although the description explains the video was actually filmed last year in Botswana's Okavango Delta.

The footage, filmed by GoPro cameras attached to the husband's chest and the back of the wife's helmet, shows the pair riding on horseback with the rest of their safari group when a female lion appears and starts chasing the group.

The member of the group cuts in front of the horse carrying the husband, Eli, and the camera attached to his wife, Lyndsey, records as the man falls to the ground.

The lioness appears initially to be running straight toward Eli, but breaks away from him without attacking.

The group's guide comes back and helps Eli return to the others, just as they've discovered that his horse is missing its rider.

"One of the horses cut in front of my husband's horse, and he pushed off to avoid potentially getting trampled underfoot. When he emerged from the water, he found himself virtually face to face with the lioness. Luckily, she decided he wasn't the lunch she wanted and he was able to safely retreat back to our guide," Lyndsay wrote in the video's description.

Ranger's calm, still stature saves close call with lion on safari Bears allow man to walk among them, but one hates the camera Five tigers play in the waves at beach in Dubai 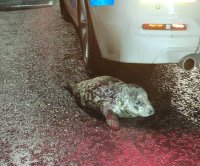