Venomous snake stows away in passenger cabin of Aeromexico flight 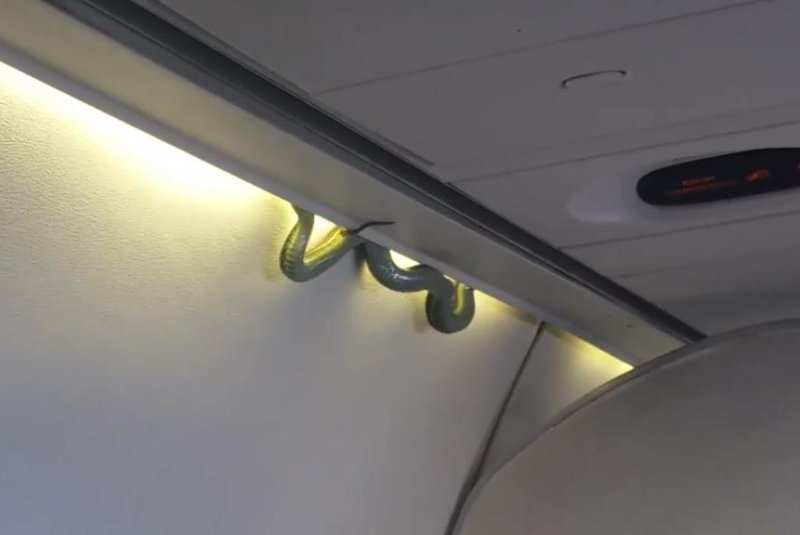 A snake slithers out of an overhead baggage compartment on an Aeromexico flight. Screenshot: Inda_medina/Twitter

MEXICO CITY, Nov. 7 (UPI) -- An Aeromexico flight was given a priority landing in Mexico City when it encountered an in-flight hazard straight out of Hollywood -- a venomous snake on the plane.

Indalecio Medina, a passenger on Sunday's Flight 231 from Torreon to Mexico City, posted a video to Twitter showing the snake, believed to be a venomous green viper, descending from an overhead baggage compartment and falling onto some seats while the plane was in flight.

Medina, who described the incident as a "unique experience," said he captured the snake in a blanket and "gave it some magazines to read."

The plane was given priority landing clearance in Mexico City and members of the city's animal control department came aboard the aircraft to remove the serpent.

"The procedures carried out for this flight are currently being evaluated to determine how the animal entered the cabin and measures have been taken to avoid such incidents in the future," Aeromexico said in a statement to CNN.

Odd News // 4 hours ago
Snowstorm leads to impromptu sleepover for 31 people at Denmark Ikea
Dec. 3 (UPI) -- Customers and employees at an Ikea store in Denmark spent the night on the furniture store's display beds after they became stranded by a snowstorm.