A Coast Guard crew and marine rescuers return a pair of pygmy killer whales to the Gulf of Mexico after months of rehabilitation. Screenshot: Storyful

JACKSONVILLE, Fla., Nov. 4 (UPI) -- The U.S. Coast Guard released video of two pygmy killer whales being returned to the Gulf of Mexico months after they were found stranded in Mississippi.

The video, released Thursday by the U.S. Coast Guard District 7 PADET Jacksonville, shows the crew of the Coast Guard Cutter Cypress working together with representatives from the Institute for Marine Mammal Studies and the national Oceanic Atmospheric Administration to return the whales to the water off the Gulf Coast on July 11.

The video shows the two male whales being released into the water from specialized containers on the boat.

The pygmy killer whales were rehabilitated by the IMMS after being found stranded in a Mississippi marsh in September of 2015.

Odd News // 13 hours ago
Woman wins $866,890 after using same lottery numbers for years
June 14 (UPI) -- A Michigan woman who won an $866,890 jackpot from the Michigan Lottery's Fantasy 5 drawing said she won the prize using the same numbers she has played for years.

Odd News // 14 hours ago
Contractor finds seven kittens, nine cats inside wall of vacant home
June 14 (UPI) -- A Philadelphia contractor who was taking down a wall at an abandoned home when a kitten fell out ended up rescuing nine cats and seven kittens from the inside the wall.

Odd News // 14 hours ago
Lost class ring returned to New York man after 63 years
June 14 (UPI) -- A New York woman cleaning out her parents' home after their deaths discovered a class ring and was able to track down the man who lost it 63 years earlier.

Odd News // 15 hours ago
White snake on the loose in Manitoba neighborhood
June 14 (UPI) -- Authorities in Manitoba are asking residents to keep an eye out for an estimated 8-foot white snake seen slithering through residential yards. 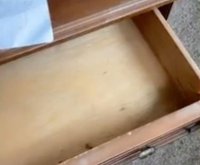 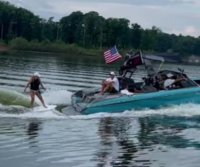 Odd News // 17 hours ago
Indiana woman wakesurfs for 8 hours to more than triple Guinness record
June 14 (UPI) -- An Indiana wakesurfer more than tripled a Guinness World Record by riding the wave behind a boat for 8 hours -- and only had to quit because the record-keeping judge had to leave.