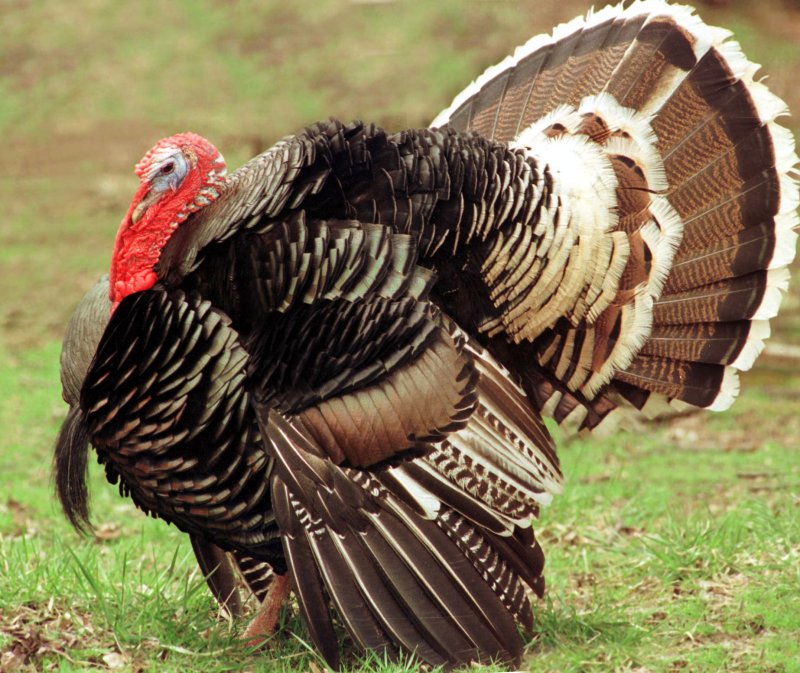 The city of Davis, Calif., passed an ordinance allowing a trap-and-release program to remove up to 40 aggressive wild turkeys in the area. One turkey, known as "Downtown Tom." forced several frightened residents to call police for help. Photo by UPI /Mike Williams | License Photo

DAVIS, Calif., Nov. 3 (UPI) -- A California city has voted to remove and re-locate an increasing number of aggressive turkeys.

One particularly aggressive Turkey, known as "Downtown Tom," prompted several residents of Davis, Calif., to call local police for help, according to KCRA.

"Yes, this is almost embarrassing. I am trying to get into my office on G Street in Davis and I have this huge turkey surrounding my car, circling me and I don't know what to do," one caller said. "I don't want to run it over but I can't stay in my car all morning, is there any advice you can give me?"

The Davis City Council voted 4-1 in favor of a more than $20,000 trap-and-release program in response to the presence of up to 40 aggressive wild turkeys, the Davis Enterprise reported.

"We can either proactively be a part of the solution...or we can have it come back to us when people have taken (the issue) into their own hands or someone seriously gets hurt," Councilwoman Rochelle Swanson said.

The ordinance allows for lethal removal of the turkeys, including Downtown Tom, who managed to escape capture by wildlife officials.

The city also placed signs in the downtown area giving residents tips for dealing with the aggressive fowl.

"Be the dominant species, essentially," City Wildlife Resource Specialist John McNerney said, summarizing the advice. "Don't let it intimidate you, which can be difficult for some folks."

Odd News // 5 hours ago
Stuck horse rescued from Nebraska swamp
Sept. 26 (UPI) -- A horse that broke away from its owner in Nebraska ended up requiring help from firefighters to escape from a swampy area.

Odd News // 3 days ago
Deer rescued from mesh hammock in the Florida Keys
Sept. 23 (UPI) -- Sheriff's deputies in Florida came to the rescue of a deer found entangled in a mesh hammock.

Odd News // 3 days ago
Bald eagle rescued after truck collision on New York highway
Sept. 23 (UPI) -- Police in New York came to the rescue of a bald eagle found on a highway after colliding with a truck.

Odd News // 3 days ago
Horse rescued from owner's backyard pool in California
Sept. 23 (UPI) -- Animal rescuers responded to a California home to help a horse that ended up stranded in its owner's empty backyard pool.
Advertisement

Alligator floats along the lazy river at Illinois water park