A Samsung Galaxy Note 7 bursts into flames after being struck with a hammer. Screenshot: Storyful

BEIJING, Nov. 2 (UPI) -- A Samsung user whose Galaxy Note 7 exploded and charred his laptop made his replacement phone also explode -- but this time he used a hammer.

Hui Renjie captured video Sept. 26 of his Samsung Galaxy Note 7 overheating and melting while on the keyboard of his Macbook, causing char damage to the laptop.

Renjie, who said Samsung denied him a refund, obtained a new Galaxy Note 7 and decided to see how difficult it would be to cause the phone's battery to explode like his first one.

The video shows Renjie placing a piece of wood over the phone and striking the wood with a hammer a few times before switching to direct hammer strikes on the phone.

Two direct strikes is all it takes to cause the phone to burst and spit flames in all directions.

The fire burns out in a matter of seconds, leaving the device completely destroyed. 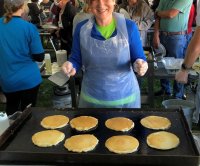 Odd News // 14 hours ago
Exotic eagle on the loose in Pittsburgh after aviary escape
Sept. 27 (UPI) -- Officials with the National Aviary in Pennsylvania said a Steller's sea eagle that escaped from its enclosure has been repeatedly spotted around Pittsburgh.

Odd News // 15 hours ago
World's longest charcuterie board assembled in New York
Sept. 27 (UPI) -- A group of New York food fans broke a Guinness World Record when they assembled meats and cheeses into a 315-foot-long charcuterie board.