I join team #MASTC ... Moms against stupid tiny carts. My ankles are bruised from this. I'm looking at you @Target pic.twitter.com/IyXJd8YPFZ

MINNEAPOLIS, Sept. 23 (UPI) -- Target announced it is ending a trial run of kid-sized mini-carts at stores in Minnesota and New York after shoppers complained of bruised ankles.

The Minneapolis-based chain announced the mini-carts, which were rolled out at 50 Minnesota stores and 22 New York stores just a few weeks ago, are being removed after the company received a flood of negative feedback from shoppers.

Parents also complained the carts invited children to load them up with unwanted items, and led to tantrums when the adults refused to buy the contents.

"At Target, our guests are at the center of everything we do, and we value their feedback," Target spokeswoman Kristy Welker told the Minneapolis Star-Tribune. "We briefly tested kiddie carts at 72 Target stores, and after reviewing guest and stores feedback, we have made the decision to stop the test."

Welker said there was some positive feedback about the carts, but there were far more negative comments. She said store employees also complained the carts took up too much space and cluttered the front of the stores.

The carts went viral on social media in recent weeks after blogger Laura Rinas joked about starting a movement called "Moms Against Stupid Tiny Carts," which led to the hashtag "#MASTC."

Twitter user @keepinupwjonesy summarized the problems with the mini-carts with a short video showing a small child repeatedly crashing her mini-cart into the back of an adult's legs.

Liv is obsessed with the little carts at @Target 😂👌 pic.twitter.com/NG4si4p2Tz 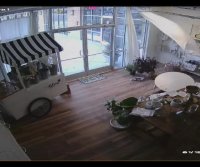 Odd News // 19 hours ago
'Agile' goat gives police 'a run for their money' in Ireland
Jan. 20 (UPI) -- Police in Ireland said they are trying to find the owner of a loose goat that led officers on a chase after being seen running loose on a road.