Artist Sigalit Landau and photographer Yotam From collaborated for the "Salt Bride" series which features eight photographs of a black dress being transformed by the salty waters of the Dead Sea. The collection of photos is being hosted by the Marlborough Contemporary gallery in London. Photo by Sigalit Landau and Yotam From/Marlborough Contemporary Facebook

Landau, partnered with photographer Yotam From, submerged a traditional Hasidic dress in the salt-rich water of Israel's famed Dead Sea for two months and photographed the transformation process.

The series of eight photos are featured in London's Marlborough Contemporary gallery until Sept. 3.

The long black dress is a replica of the costume worn by the bride in the Yiddish play The Dybbuk, in which the bride is possessed by an evil spirit and made to undergo an exorcism.

In "Salt Bride," the costume changes from black to sparkling white as the salt crystallizes the gown.

"Over time, the sea's alchemy transforms the plain garment from a symbol associated with death and madness into the wedding dress it was always intended to be," the Marlborough said in a statement.

Odd News // 3 hours ago
Whale swallows lobster diver, rejects him as meal
June 12 (UPI) -- A Massachusetts lobster diver survived being swallowed up and then spat out by a humpback whale off the coast of Cape Cod, giving him about 40 surreal seconds in the mouth of the large marine animal. 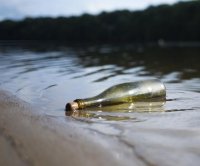