A Darwin, Australia, family's tenant discovered a crocodile in the bathroom in the early morning. Screenshot: Nine News Darwin/Facebook

DARWIN, Australia, July 25 (UPI) -- An Australian family woke up to a bizarre discovery -- someone had entered their home and left a 5-1/2-foot crocodile in their bathroom.

Homeowner Becky Myers said she and her family members often spot crocodiles near their home in the Bees Creek area of Darwin, but the saltwater croc her tenant discovered in their home recently was the first they had ever found inside the house.

The tenant sent a photo of the croc via Snapchat to Myers' daughter, Coralie, 16.

"I woke up like 'what the hell? Am I dreaming? This can't be real,'" Coralie Myers told NT News. "I went into bathroom and there's a croc sitting there on my floor. I didn't know if it was alive or not -- its eyes were open but it wasn't moving."

The 5-1/2-foot crocodile was indeed alive, but in poor health. Her mouth had been taped shut before being abandoned in the bathroom by an unknown prankster.

"[The tenant] thought my mum put it there because she went fishing the other day," Coralie Myers said. "But we don't know who it was."

"The croc didn't creep me out, the fact someone came in to our house freaked me out," she said.

Crocodile ranger Tom Nichols said the croc put up a bit of a fight despite her poor health and taped mouth. He said she was taken to a nearby farm for medical attention.

Nichols said the prankster or pranksters could face hefty fines for interfering with wildlife. 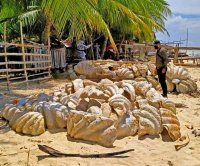